Hellooooo!  It's embarrassing how long this post has been sitting unedited in my que! So finally it's posted ✓.... Mixing business with pleasure is always a win~win for me. Especially when it involves travel, family, friends and the honor to be an official selection at a pretty awesome Film Festival. My little film 'WAITING TO DIE IN BAYSIDE QUEENS' is a short film about my life at age 15 as an overly dramatic hypochondriac growing up in Queens, NY. Yes, it's a comedy.  Writing this story was actually my daughter's idea, seems I've told her some very colorful stories over the years about me and the 1970's. Oh and she happens to be an actress, so she played me, that's pretty surreal. We filmed it in only one weekend. The crew were friends of hers and friends of friends who read the script and thought is was really funny, which made me really happy! And they were all completely amazing and talented and amazing. I know I said that twice, but they deserve it. And also my husband, handsome, as I like to call him, who Executive Produced with me and stepped in to play my Uncle the Dr. which he now considers his claim to fame and is waiting for his Oscar. 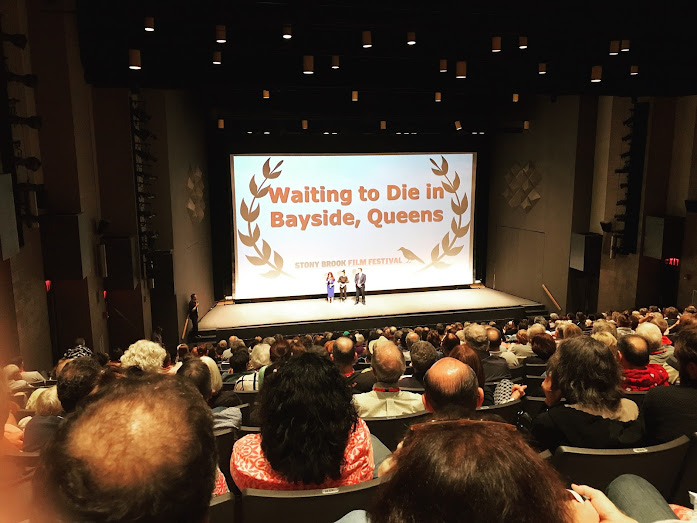 That's us down there, looking like ants. Me, my Daughter and our Director doing Q & A after the screening. We've done a lot of these but never in such a large theater, 800 people! It was really fun having people come up to me after telling me that they grew up in Bayside or their parents are from Queens, or just that they could relate in general. The film is an Official Selection in 9 festivals so far! EKKKK! We've won a Best Screenplay Award, Best Actress Award, a Best Overhaul Short Form and a Best Editor Award. And that's so exciting but the Stony Brook Festival on Long Island holds a special place in my heart. We were told we were their first locked film and chosen out of thousands of entries. I cried. My family came, my dear friends came, and my best friends from Jr. High and High School, one of whom I have not seen in 40 years came! I cannot express how much that meant to me, I cried, again. 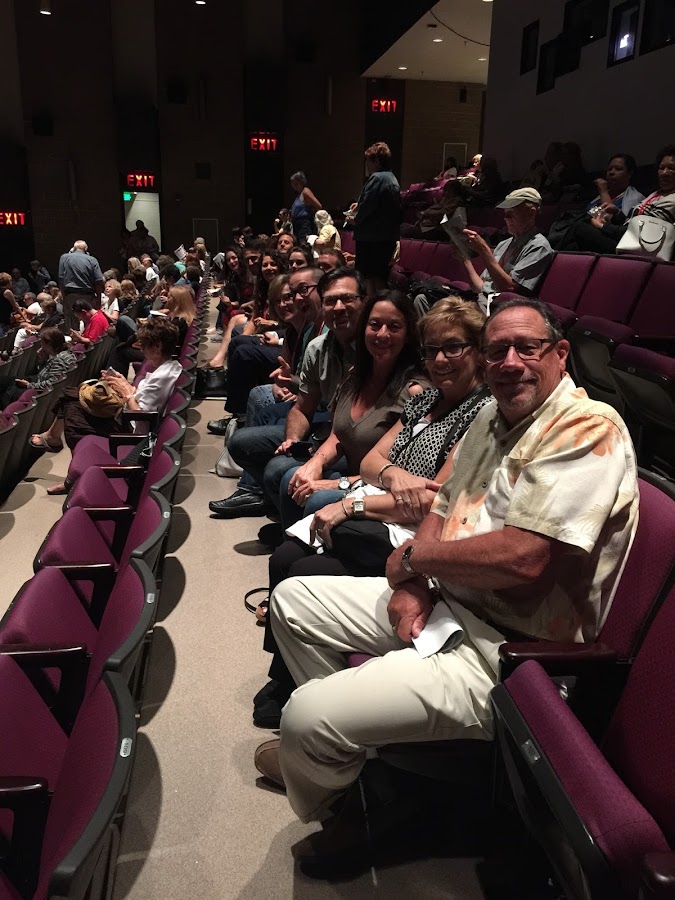 Love everyone in this row! 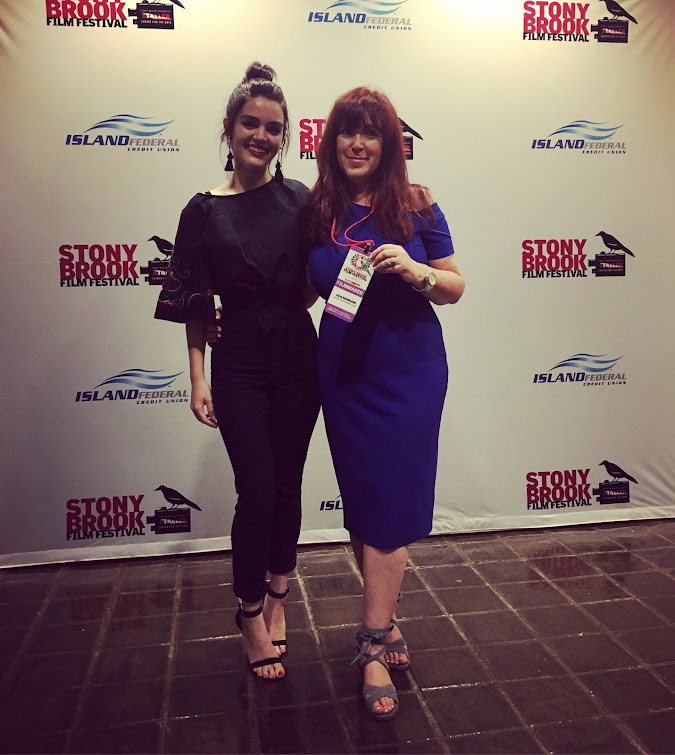 Me & my daughter Dana, who plays the main character Jordyn Sherman. 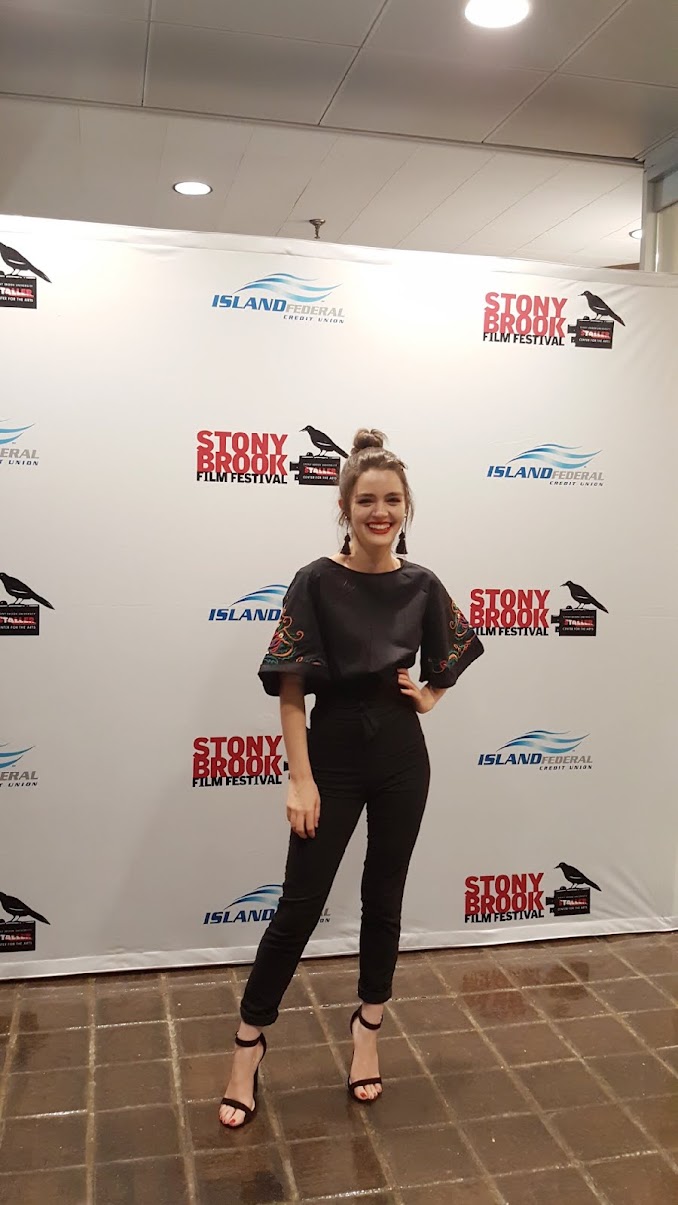 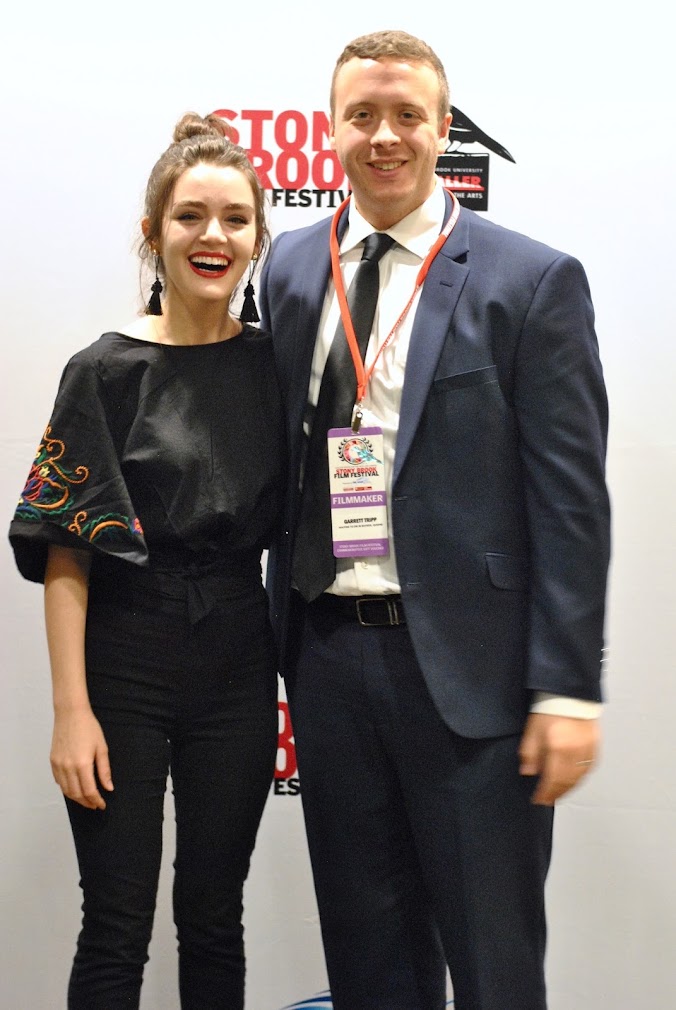 This festival was extremely generous and put us in a lovely hotel called Danford's at the Marina in Port Jefferson Long Island. Such a quaint little town with historic homes dating back to the 1800's. 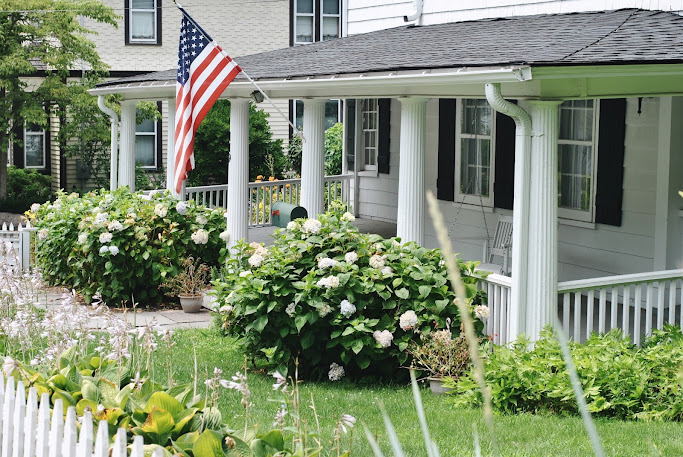 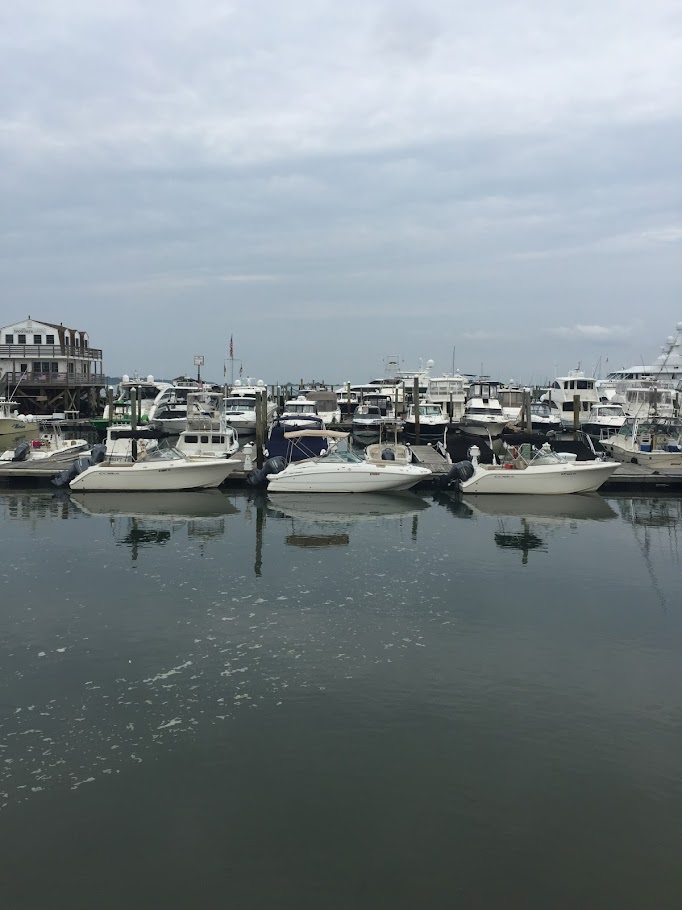 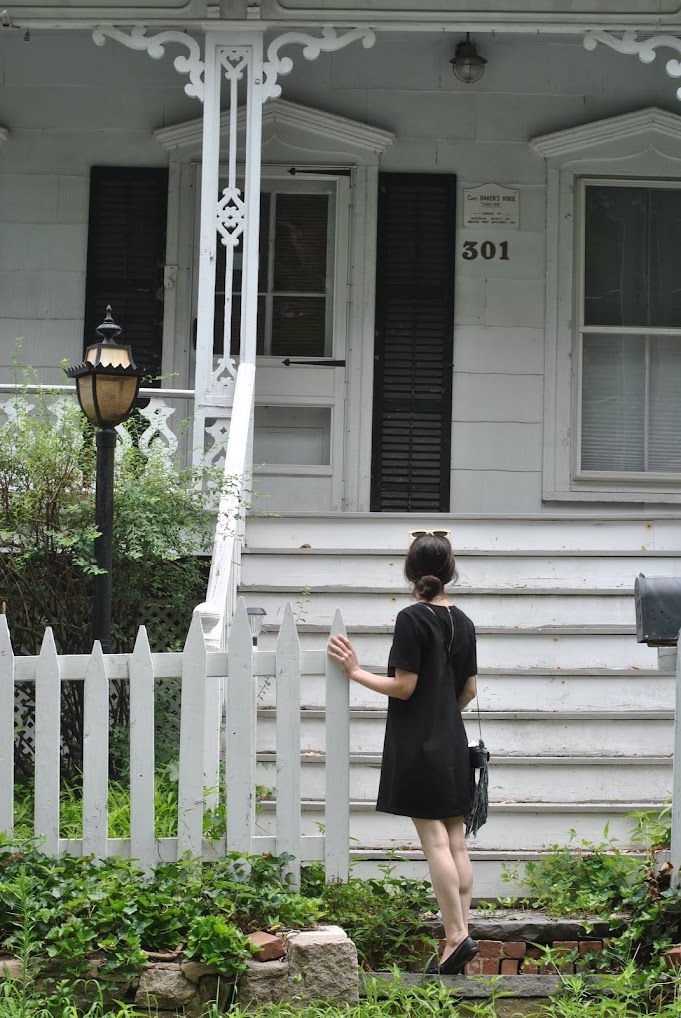 We came in a day early to play and spend the day in the city with our favorite peeps. And we did, 16 hours of the day to be exact! I like this picture of me below because you can't tell how much I am dripping with sweat, seriously dripping, and it was taken right before my hair went to the dark side. I moved to the west coast to avoid humidity. In spite of that, it was a fabulous day. 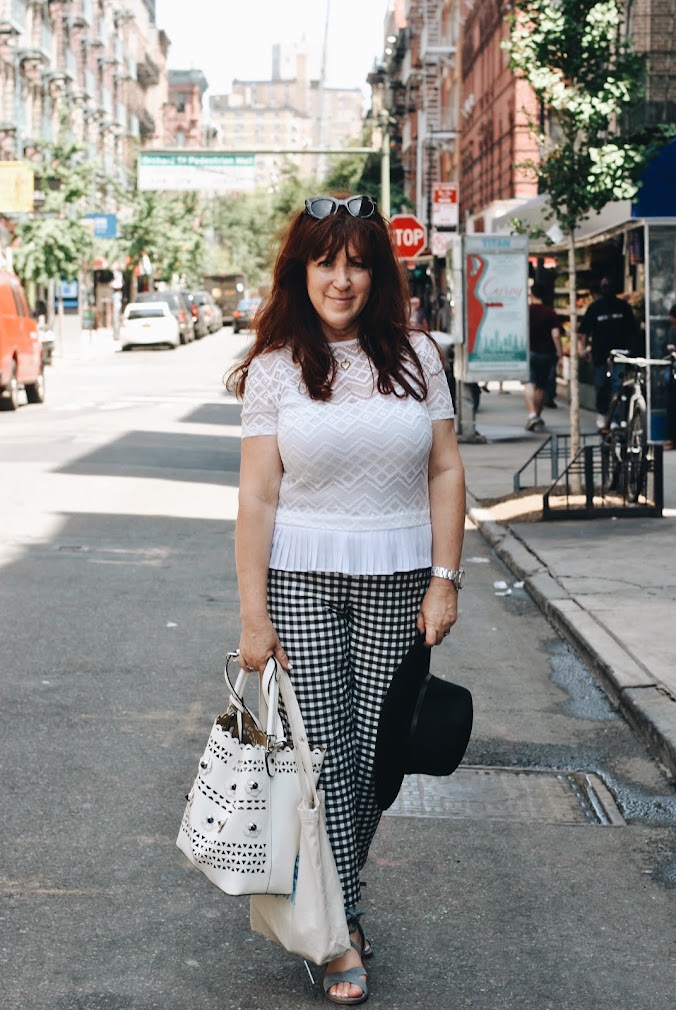 Made a pilgrimage to the lower east side, Orchard Street to be exact, I hadn't been in years. It holds many memories for me as the place my parents would take me and my sister every September to buy school clothes directly from the manufacturers' showrooms and then we'd eat at Katz's Deli and my Dad would point to the salamis and tell us that his uncle used to send him salamis from Katz's when he was in the Army. He told us the same story every time, and we never got tired of hearing it. It's been gentrified and is apparently now a chic place to live. In those days it was pretty slummy and full of tenements and you only went there for bargains and Katz's. Buildings have been remodeled, chic boutique hotels have sprung up and the only slums left are housed in an actual Tenement Museum. We found a new favorite restaurant (new to us) on this trip called Russ and Daughters on Orchard Street seriously amazing. 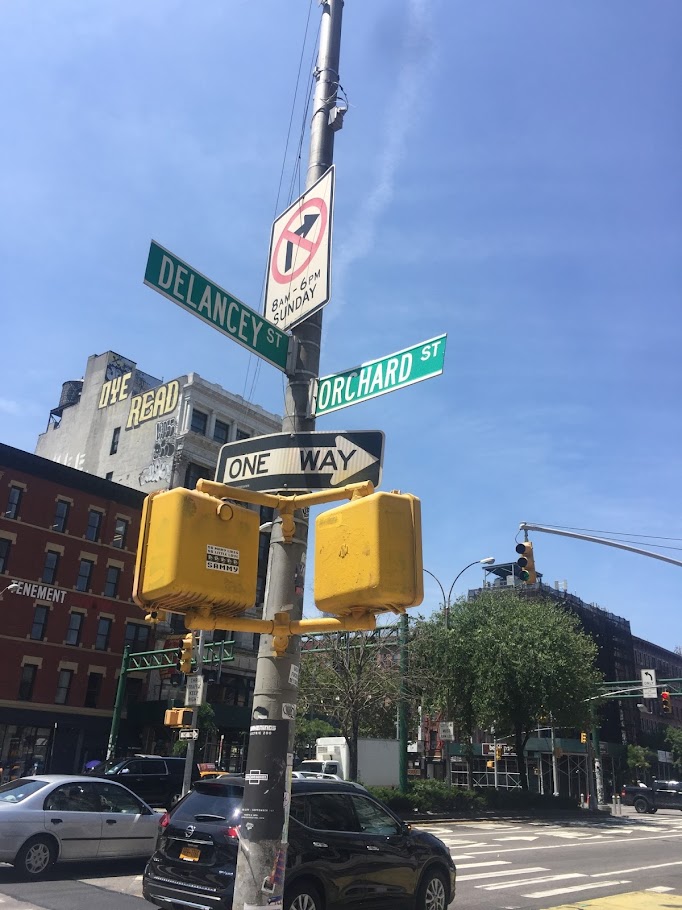 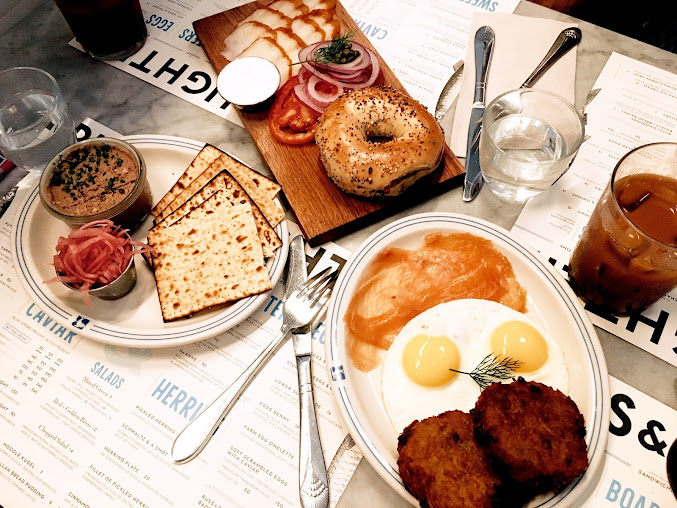 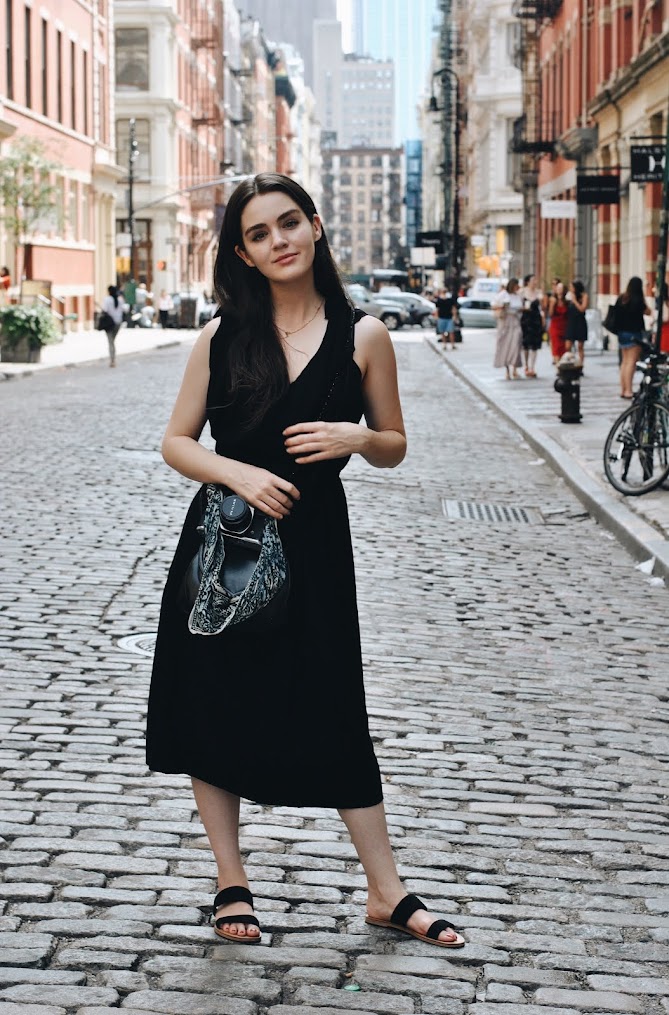 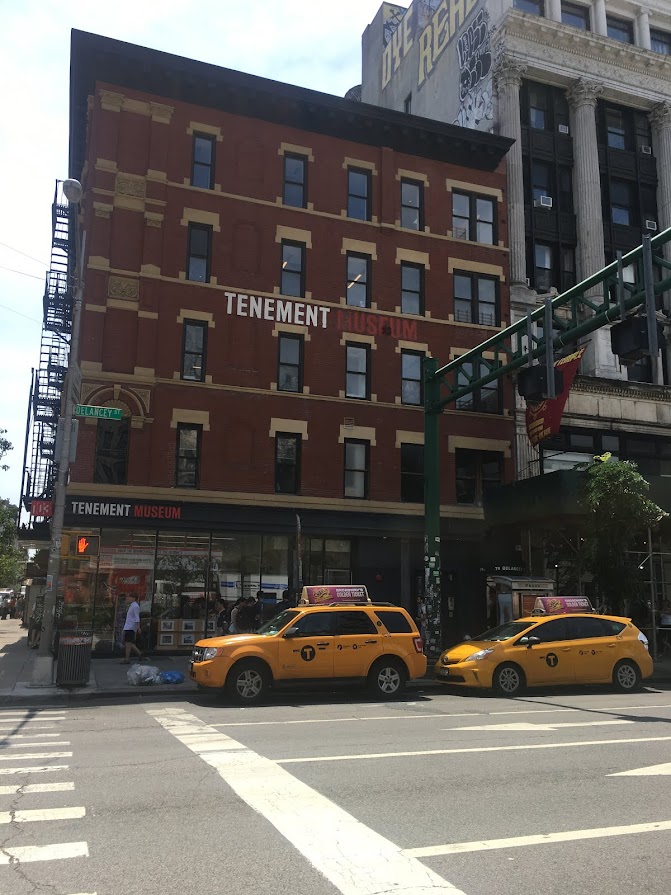 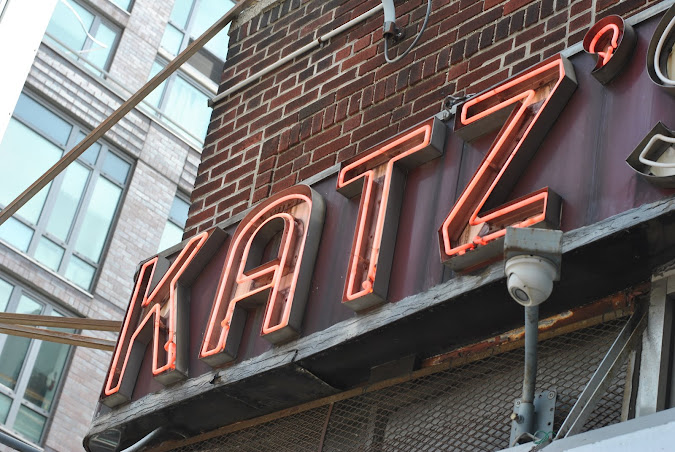 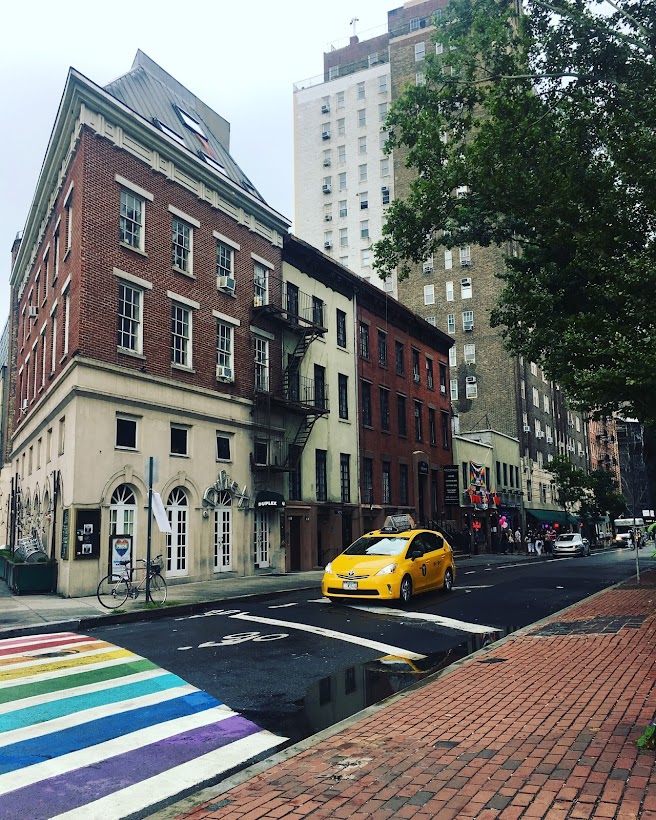 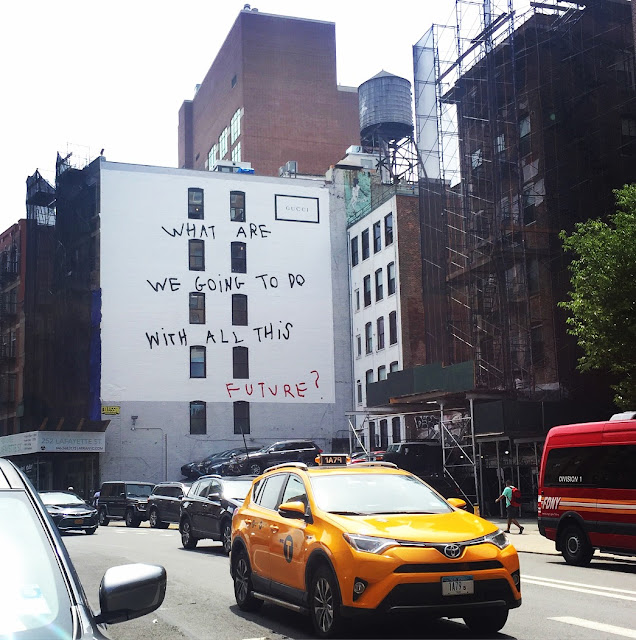 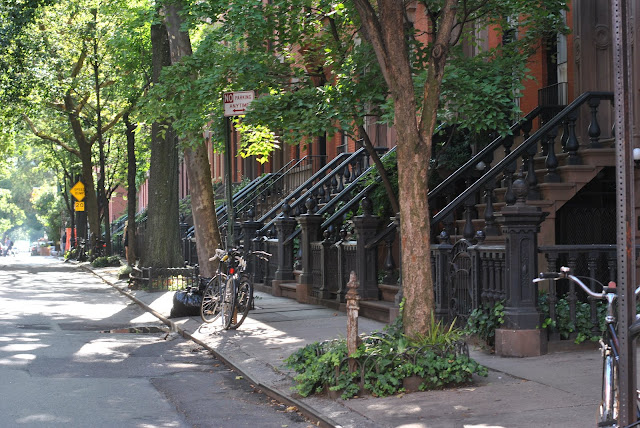 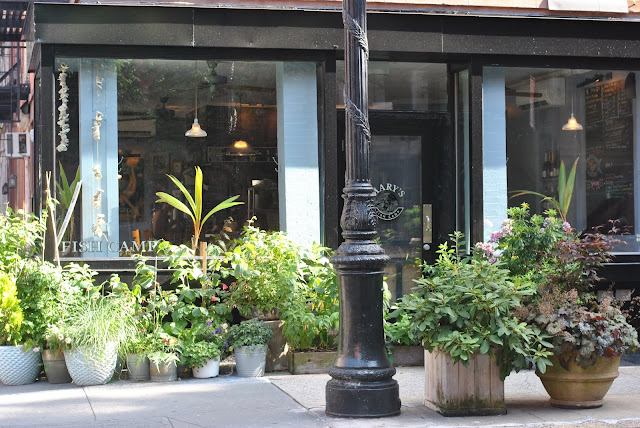 At the end of the day we headed uptown to one of our favorite restaurants Aria, in Hell's Kitchen, another neighborhood that was off limits when I was growing up. When I was in college at FIT on West 27th Street between 7th & 8th Ave., we were only supposed to go toward 7th Ave., never, ever the other way towards 8th, 9th or 10th. And heaven forbid 11th which has turned into a great neighborhood full of restaurants and co-ops that now no one can afford. Joined at Aria by friends who have a stunning apartment in Hell's Kitchen, check out the pics from their roof top after dinner. 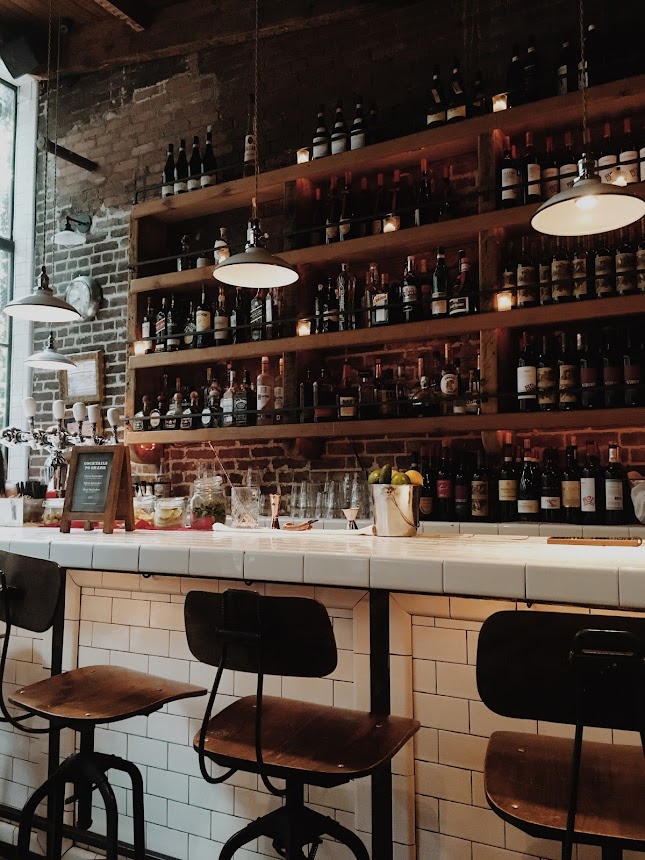 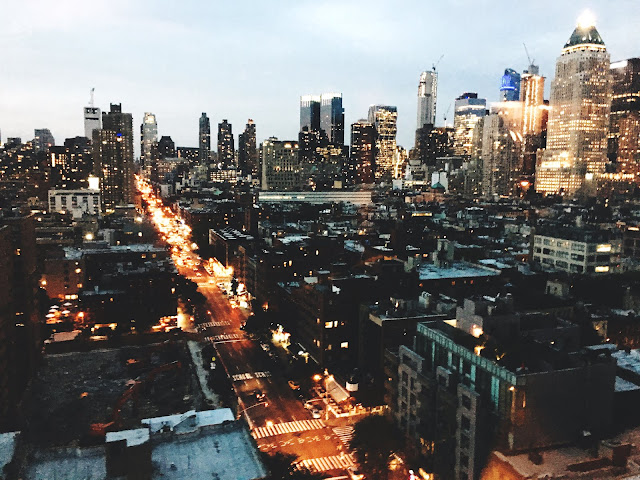 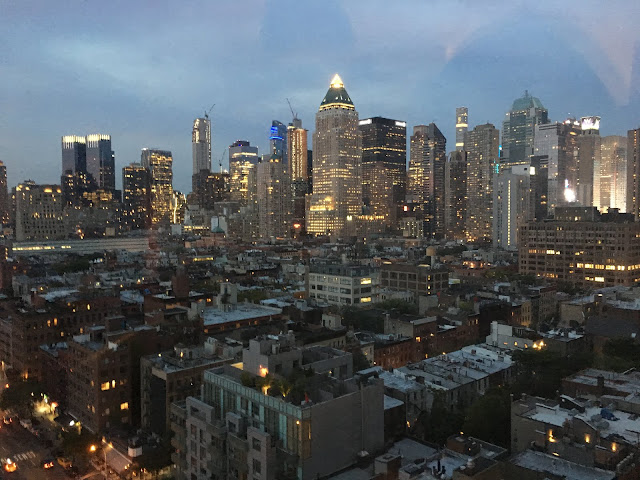 I've become an expert at quick trip packing. I used to say I needed choices, now I choose carry on.  My packing advice is mix and match everything, chose on outfit for each day and wear the same thing to travel to and from. Easy, unless we're talking about shoes and that's another story. 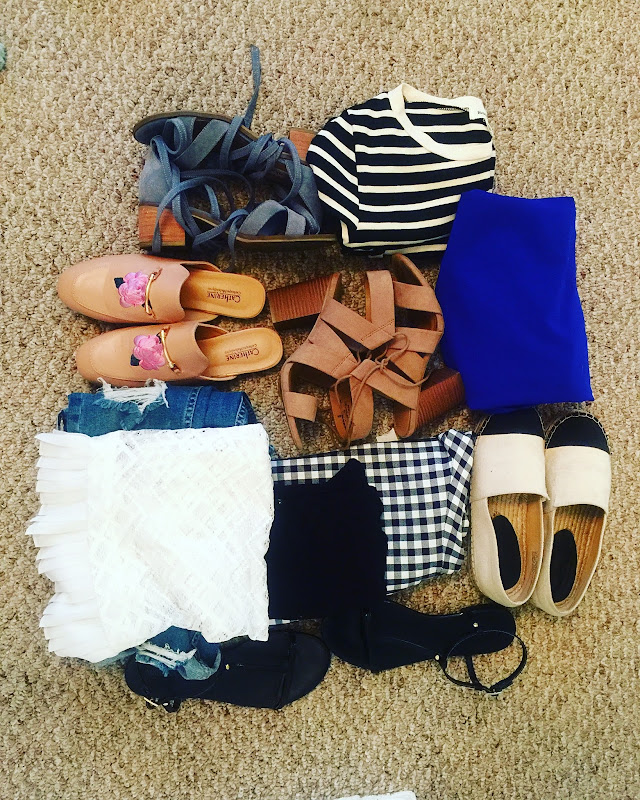 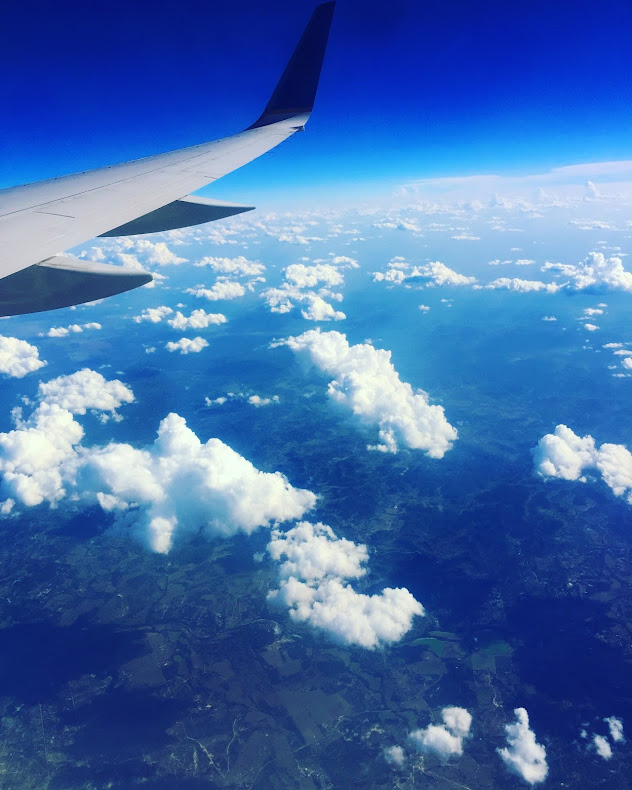 Next up for 'Waiting To Die In Bayside Queens' we set sail for Catalina Island then off to North Carolina and St. Louis.

SaveSave
Posted by From Drab to Fab at 9:32 PM