OK so I'm no movie critic but when someone in your family is on the SAG nominating committee and they get invited to screenings with a plus one ~ (take me, take me!) And tons of DVDs cram your mailbox every day from October - December you end up watching a lot of movies! Now this is just my opinion and here's my criteria to keep in mind; I happen to like happy endings, I like comedy, I like true stories, I won't watch anything where there is graphic violence against women. That being said, here are my picks and ekks. 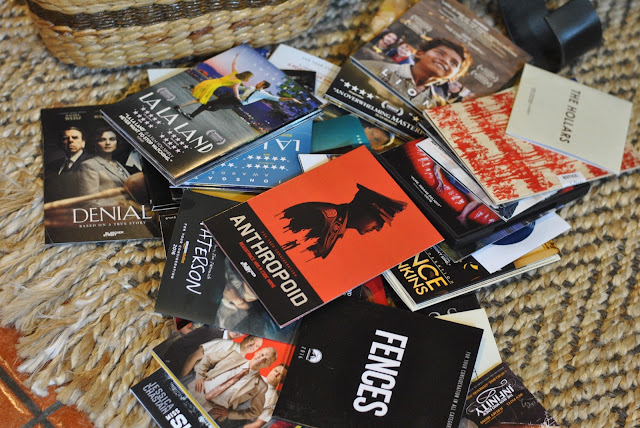 LION - My favorite so far, an incredible true story and an extraordinary piece of film making. The actor who plays the little boy will steal your heart as will Dev Patel. The cinematography is stunning. See it on the big screen.

RULES DON'T APPLY - We saw this one at Fox Studio and Warren Beatty and Annette Bening did the Q & A after which was very cool, they were funny and told stories about each other on set that only a husband and wife could tell. He wrote, stared in and directed the film. It's a fictional story but it revolves around the real world of Howard Hughes and old Hollywood. It's funny, poignant and it has a happy ending although not the way you'd expect, so I'm not spoiling it for you. Definitely see on the big screen.

DEEP WATER HORIZON - This is the true story about the BP oil spill off the coast of Texas. It's a shocking eye opener and I think a must see due to the subject matter. It was done with such authenticity that we felt like we were actually watching it happen. We also saw this one at a screening. Kurt Russell did the Q & A after. Definitely the big screen!

MISS SLOAN - This is a great movie but I don't want to spoil it for you, so I can't say much, just that Jessica Chastain plays a Washington lobbyist and if you like a political thriller you'll love it. Big screen or when it's out on Netflix.

DORIS - This one's for girls night, a sweet and funny little story of an eccentric older women played by Sally Field who sets her sights on a 20 something co-worker. Small screen.

BRIDGET JONES BABY - Also girls night. OK, it's not a masterpiece of film making but if you're a Bridget Jones lover, and I am, it's a must see. Small screen OK.

SULLY - Going to give you my husband's opinion on this one. He says it's great, and I have heard that from a lot of people and although it has a happy ending, as it did in life, it's the true story of the airplane that lost both of it's engines on take off due to birds in the engines. I won't see it because I love to travel but I'm not a great flyer ~ enough said.

20TH CENTURY WOMEN - I found this to be very depressing, I almost turned it off about 5 times in the beginning.  It got better in the middle. Acting was great but other than that a disappointment.

NOCTURNAL ANIMALS - I love Jake Gyllenhaal and I wanted to see this because it's a Tom Ford film but once I watched the trailer I knew I couldn't watch it due to the inciting incident.

LA LA LAND - This was really interesting. It's a musical but neither Emma Stone or Ryan Gosling can really sing. It's funny and oddly shot, with bright colors and musical numbers in the beginning which almost disappear in the middle and change into a drama at the end. It just won a critics choice award and it's definitely worth seeing on the big screen.

LOVE AND FRIENDSHIP -  This film just totally missed whatever it was trying to be. Big boring Ekk.

MANCHESTER BY THE SEA - Another film that's getting rave reviews that we thought was very depressing.  The characters had no arc, the main character played by Casey Afleck never evolves, he's just flat from beginning to end and although the cinematography of a frigid Manchester is shot beautifully it's extremely depressing looking. Ekk

HELL IN HIGH WATER - One of those moves that you ask 'why did anyone make this?'  It wasn't bad, it wasn't good, It's a guy flick, small screen.

CAPTAIN FANTASTIC - The title has really nothing to do with the movie, it's a sweet story about a guy trying to raise his kids in the wild. There's a scene in the beginning that shows them hunting for food, and it's very graphic, I left the room for it, that's just a heads up if you're a fellow animal lover. Small screen OK.

JACKIE - This is really a biopic about the assassination of John F. Kennedy from Jackie Kennedy's point of view, step by step. Small screen.

I haven't made a dent in the pile of movies yet but that's my 2 cents so far.

And if you're in the mood to cozy up with a great Christmas movie, my all time favorite picks are The Holiday and Love Actually.