FAB FINDS FRIDAY: One Girls Trash Is Another Girls Treasure

I often say that one girls trash is another girls treasure, and I'm here to tell you, I really mean it!  Recycling doesn't only mean your trash, it also means stuff, stuff that lasts forever.  Recently inspired by an instagram account I follow of @katekeeseeoc I made a little trip to Orange County.  To the Goodwill. Yes, that was a trip.  If you're a thrifter, and I am, then you track down the good stuff even when it's an hours drive.  Kate makes insta stories at this Goodwill and the home decor stuff always looks amazing.  And if you're a DIYer and/or a dumpster diver, you should follow her!

Here I am, that's the face of a happy bargain hunter, one more thing and I wouldn't have been able to see over the cart! 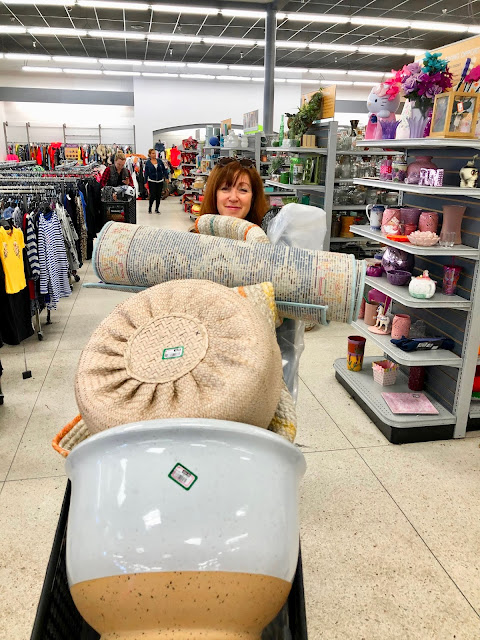 I went looking for a round rug, not easy to find.  Mike came with me, and it was a good thing he did because I wouldn't have been able to lift the rugs out of the huge bin they were in.  Tons of rugs, all new, still in their wrappings.  Him being tall made it easy,  I really couldn't even reach them!

My daughter was in NY at the time, she also loves thrifting, so she had me face time her with the camera facing out and she was all "wait let me see that, what's that over there?"  At one point she noticed this great basket and a woman behind me said "I want to talk to whoever is on the phone, they have great taste".  We kind of became a spectacle.  The store is huge.  I'll show you my haul as I incorporate it all in my current home makeover (on a $0 budget) but for now I decided to cruise through my house and share some of the amazing things I have picked up curb side through the years for FREE.  I guess you could call me a dumpster diver although I've never actually gone into a dumpster to take anything out.  My stuff just seems to show up in my path, usually curbside.

This beautiful pot was $10!  Going to put it here and move the terra-cotta one across the room, we'll put another cactus in it.  We take cuttings of cactus from outside, we have so many.  So that's FREE. 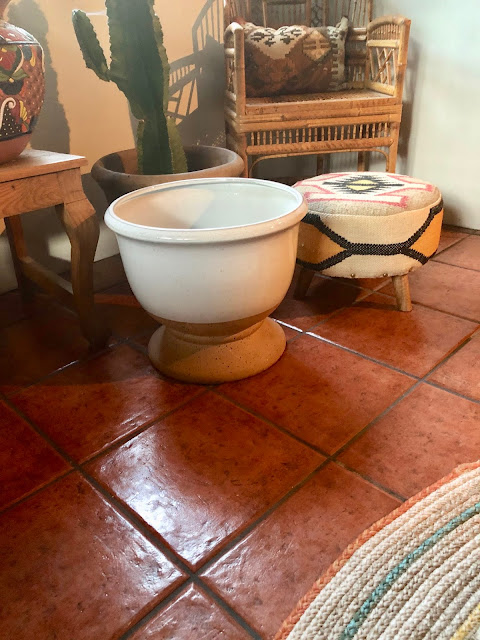 Here's a closer look at the pot and the round rug.  Still trying to get the lumps out.  First dog to pee on it gets coal for Christmas. 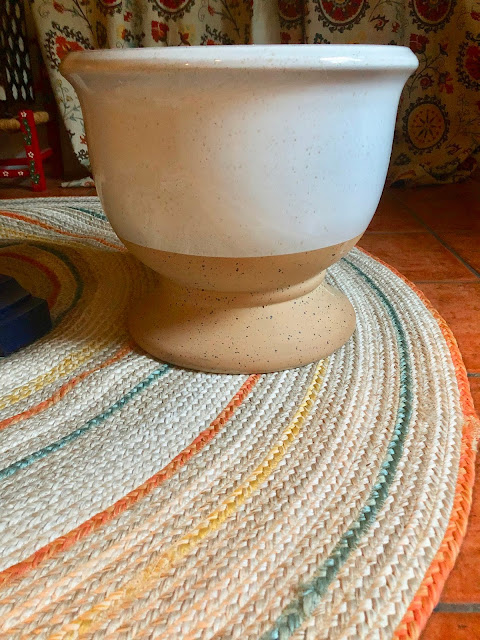 Here's the basket my daughter picked out.  The top half was folded in, and it just looked like a regular shape basket (you can see it in the shopping cart picture) which was nice enough but when I got it home I noticed the handles inside and pulled them out and it turned into this basket, I love it!  These are expensive, this one was $10.  She let me take a picture of it in her apartment in fact this entire corner was thrifted.  She even got the fiddle leaf fig off Craigs list for $15, the gorgeous light was a $40 antique store find and the flower pot was FREE when a neighbor was moving.  Also the picture on the wall was thrifted.  (FYI, real life pictures include mail on tables.) 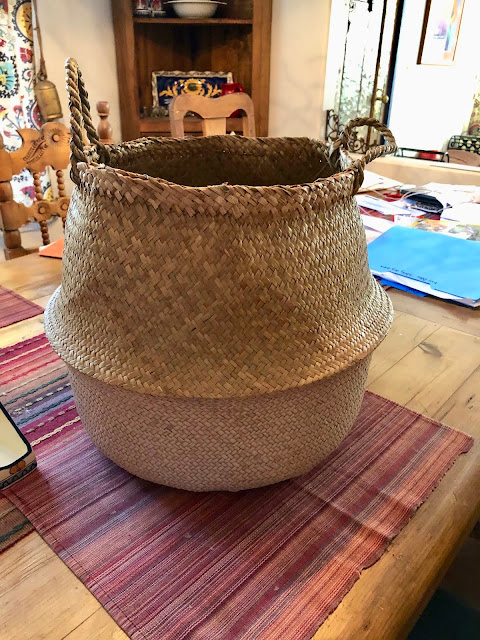 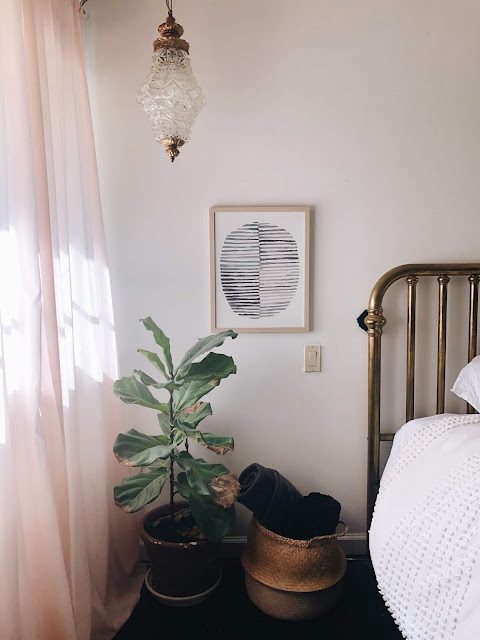 My dining room 'antler' chandelier was FREE from a friend who moved to a new house and the ceilings were to low for it.  We have high ceilings although Mike still manages to impale his head on it every now and then. 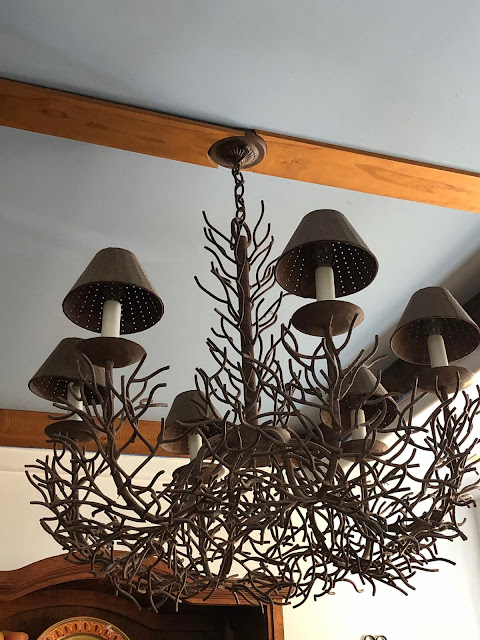 Come on, what trip to Goodwill would be complete if I didn't so something ridiculous.  What can I say, I love Unicorns. 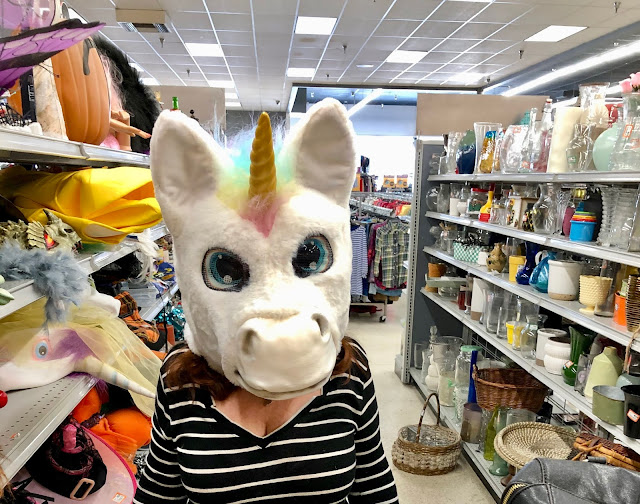 This table was a curb side find, FREE.  It was black and I left it that way for a while.  Now that we're doing a little make over I just painted it blue.  I'll be sharing before and afters soon, this is still a work in progress.  But this is my favorite blue, it matches my interior doors.   And still trying to get the lumps out of the rug. 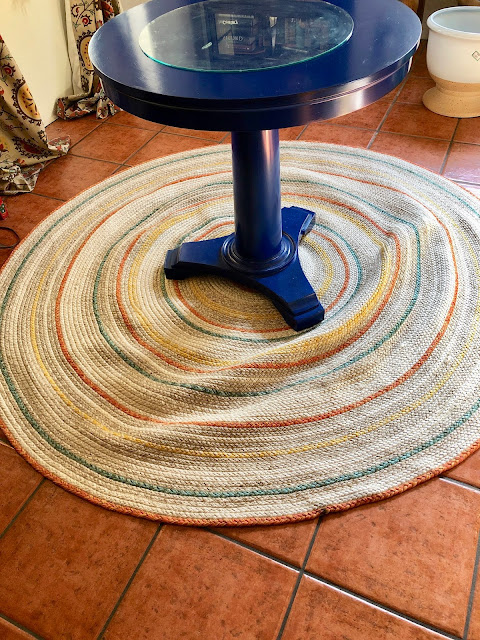 This goes waaaay back.  My dress form from when I was a fashion designer in NY, another life-time ago.  I worked for a dress company that got a bunch of new forms and was getting rid of some old ones.  I asked if I could have one.  My boss said sure.  But I had to get it out of there.   From Manhattan.  To Queens.  On the train.  After a 30 floor elevator ride down, I wheeled it 10 blocks to Penn Station.  I got a few weird looks, but mostly people ignored me, cause, that's NY.   Down two escalators,  (oh yes I did), over the scary gap and onto the train.  It hung out the window of the car for the 10 minute ride home from the train station and then from the street to the court we lived in, farthest apartment of course and on the second floor so two more flights of stairs.  It was home.  Mine forever.  I even moved it across the country. 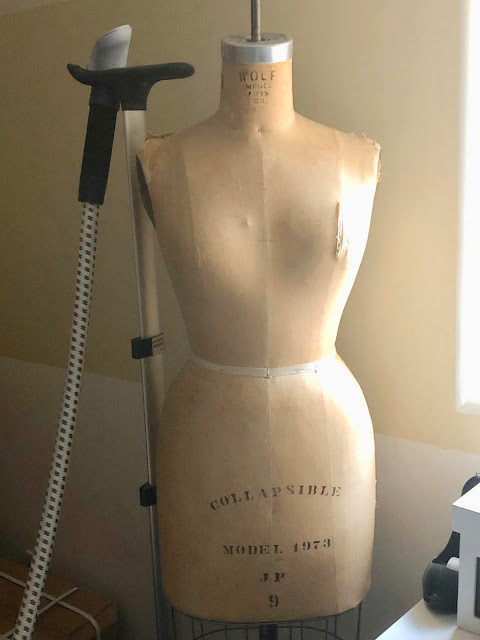 This leopard chair, in mint condition, came out of a storage room of a building I worked in, put out for the trash truck and saved by me. 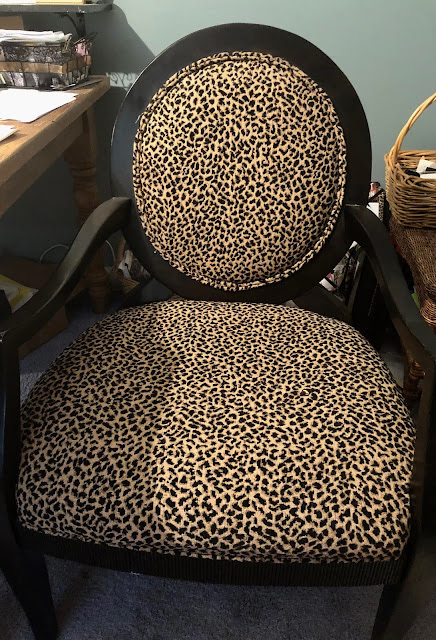 Here it is in action, that one time my desk was clean. 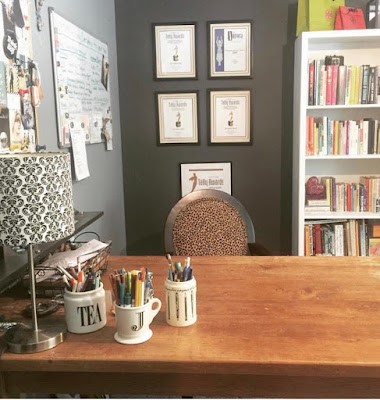 Two of these French windows were out with someones trash.  I have the other one outside in my garden.  I love them!  FREE 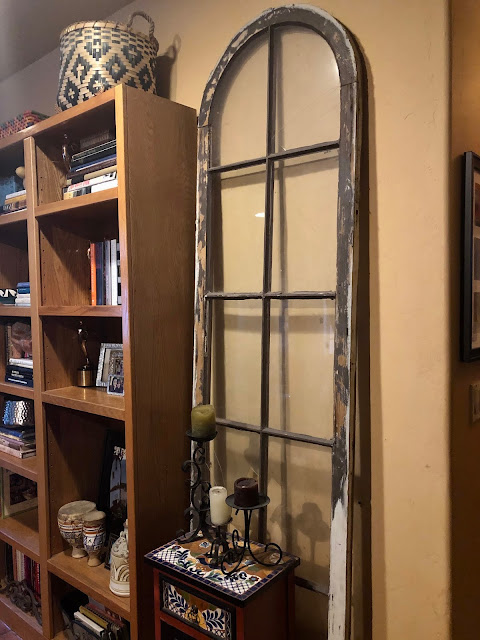 Pardon the Stella Monster, she thinks everything is hers.  This was a FREE bench, needs new cushions but I've had it about 20 years. 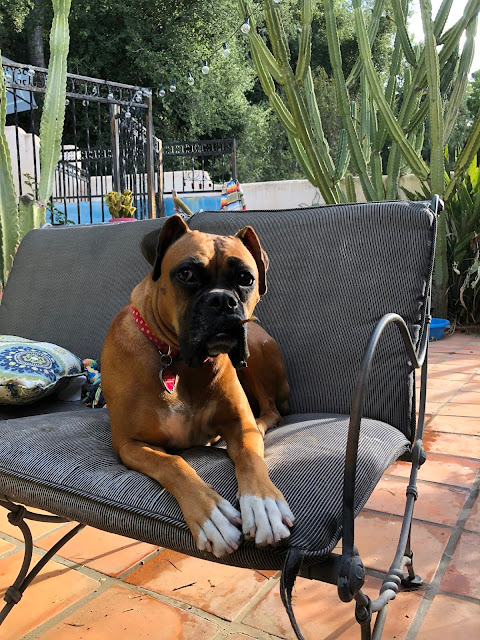 Happened to be passing by a house in my neighborhood and noticed an elderly lady putting this adorable ice cream parlor set out at the curb with a sign that said FREE.  I stopped and said I'd take it and she was so thrilled, said she had it for 40 years but was moving into a retirement home.  One can of black Rustoleum spray paint and it looked brand new.   It's sits in my veggie garden, which right now as you can see is a bit of a mess, full of ashes and debris from he recent winds and fires. (Real life).   Also while we're in my garden, the bricks were FREE too.  I noticed them at the curb of a neighbor down the street.  I made 5 trips with my trusty wheel barrel, up hill.  And I laid them myself.  I am woman hear me roar. 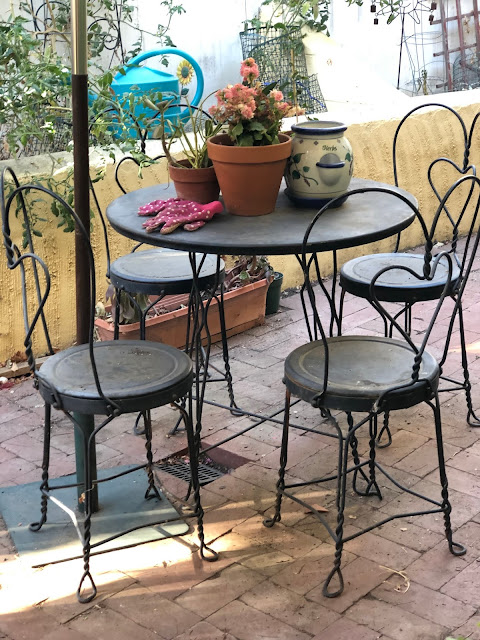 Tile chairs, two of them, garage sale $5 each. 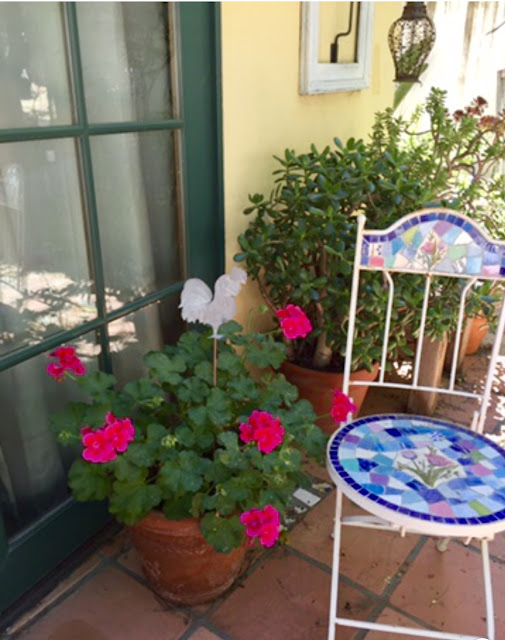 Another FREE table and chairs that someone was putting out to pasture.  I have a similar one from Pier 1 so I know the value.  Left by the curb for reasons unknown. 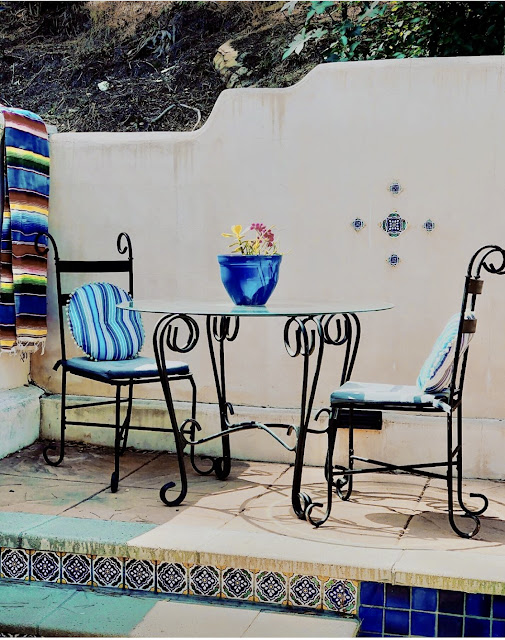 Stained glass from a construction site. 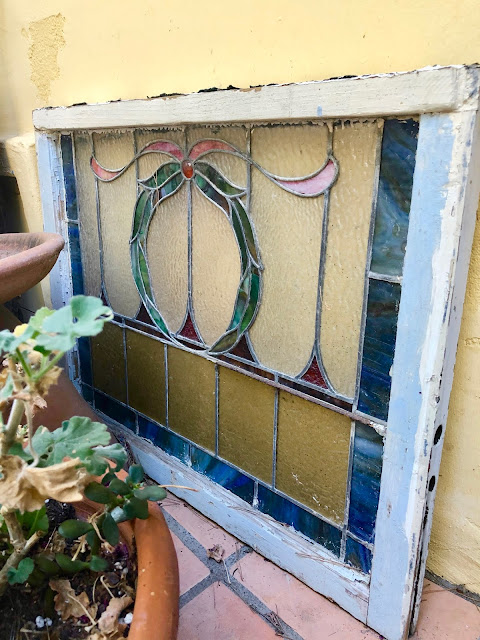 Got this chair for FREE, also with a matching ottoman, very Hollywood glam, and of course Stella claimed it. 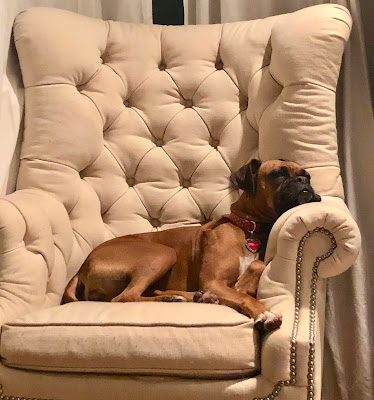 And probably the most expensive thing I've ever gotten for FREE is our fireplace mantle.  I spotted it leaning against a pile of construction debris in front of a 10,000 sq. ft. custom home being built in Beverly Hills.  I stopped and asked the construction workers if they were getting rid of it and they said the homeowner changed her mind, and wanted a different one and told them to throw it out! They said no one wanted it because it was too heavy, it's solid concreted.  Oh come on you know I wasn't passing this up!  I asked them to make sure no one took it and told them I'd be right back.  Right back as in the time it took me to rent a U-haul truck and stop at the ATM for a little tip money.  When I got back they loaded it into the truck for me.  I had just moved into my house and the fireplace was just a hole in a charred wall, no mantle.  I was ecstatic! 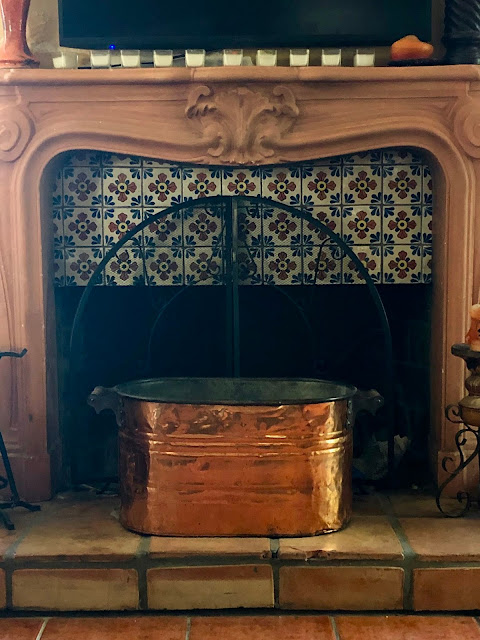 Get your bargain on!