I'm just coming back down to earth after a heavenly weekend of some major self care. And it wasn't even this past weekend, it was the weekend before! And I'm still feeling the benefits. On Saturday I was part of a virtual retreat held seasonally by Kimberly Wilson, who I adore,  called Softening Into Fall.  Even the title led me to a great big cozy sigh.  It was three hours of me time at home but with a live feed to Kimberly, in her beautiful pink palace in Washington DC, with about 10 women guests and the rest of us from around the country and around the world, able to communicate with Kimberly and each other via chat box.  The three hours consisted of  Mindfulness, Intention Setting, Yoga, Creative play, Art Journaling and beautiful bits of wisdom and support.  We participated along via a beautiful Play Book Kimberly creates which we all received in advance and of course we had our art journaling tools, for me that meant markers, stickers, magazines and Pinterest pics.

If you have never done collaging or art journaling I highly recommend it for your soul.  In fact Kimberly started off by reading a poem by Derek Walcott that I have always loved and I pulled out one of my art journals from 2007 (below) and there it was ~ "Sit and feast on your life".  Just love that.  Her next virtual retreat will be for spring and I highly recommend it! Also she has some amazing travel retreats too that you can find on her web site. I always feel completely grounded and relaxed after one of these and also focused with renewed energy.  And as an added bonus all my fur babies fully cooperated, even the Stella Monster. 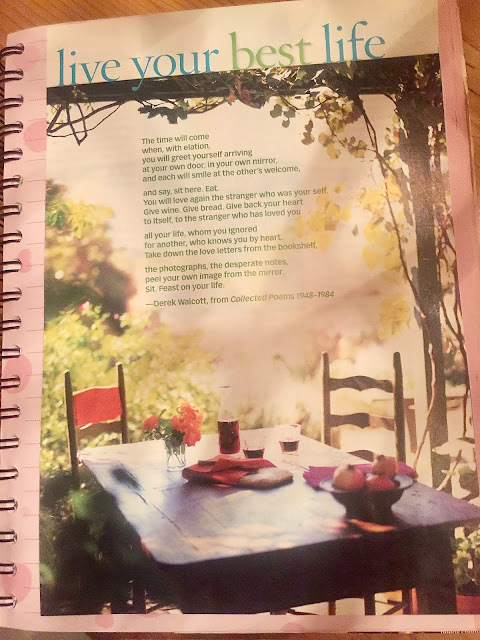 The next day, Sunday, I went to the yoga studio my bestie goes to called Harmoney Yoga, (in the South Bay for my fellow Californians), for another 3 hour retreat.  This one focused on Chakra's and yoga for healing and opening all seven Chakra's.  It included singing bowls and if you have never heard crystal singing bowls let me just say WOW, it's very beautiful. I had seen bronze bowls, one time in person at a yoga conference, but mostly on YouTube.  I've never seen them made out of crystals, some people call them healing bowls and when you hear them you'll know why.  My picture doesn't do them justice. 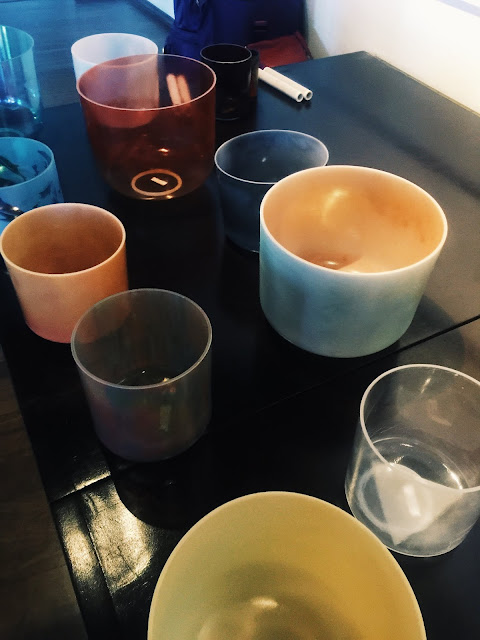 I didn't expect the class to be three hours of yoga as well. That's three straight hours, no break.  At first I thought I was out of my league, but turned out, I wasn't!  I did good and the three hours felt like one hour, it literally flew by.  I even did plow and a shoulder stand neither of which I've done in ages.  The most fun was that for each of the seven Chakra's there was an asana, (yoga posture), an essential oil, that someone came around with and dripped on our hands, the meaning of the oil in relation to that particular Chakra, a mudra (hand position), and a chant.  Also, each Chakra has a color.  And all accompanied by singing bowls.  Pretty awesome.  And the woman who played the bowls came around at the beginning of class and touched our feet with a tuning fork, yes a tuning fork. Sound weird?  Maybe, but it's supposed to open your Chakra's and let me just say that when she did it to me my body tingled from the bottom of my foot that she touched with the tuning fork to the top of my head!

I really want to share all of this with you so if you are new to Chakra healing or this aspect of yoga, here's my crib notes;

We have seven Chakra's in our body, these are our energy channels, when they're balanced, you feel good, when a Chakra's out of balance you don't feel good and each Chakra can be related to symptoms, pain, stress, illness, etc.  I like this chart (posted on insta gram by meg-weatherly) because it gives you the name of the Chakra, it's color and the Sanskrit chant, also called mantras. 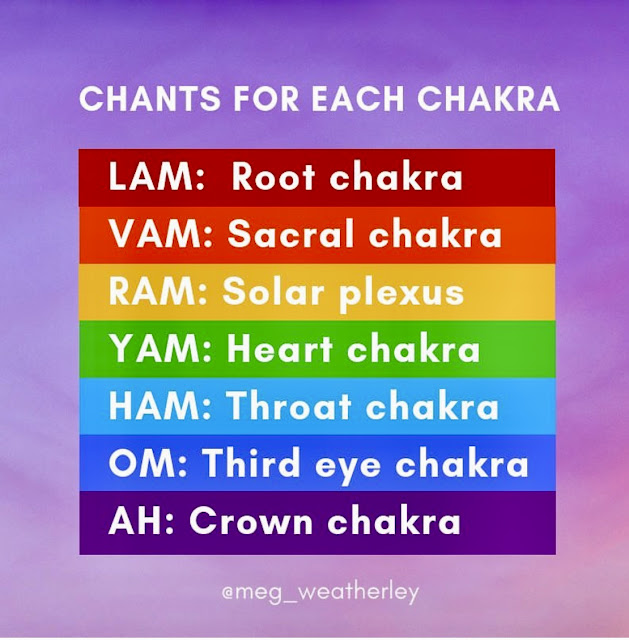 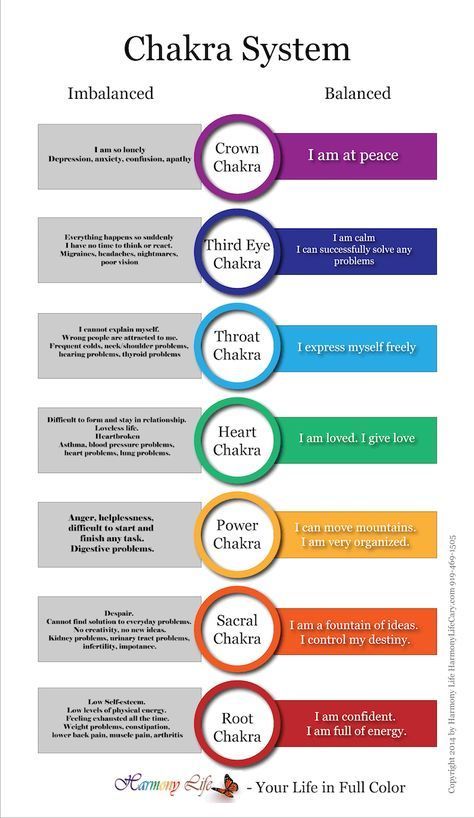 If you are interested in learning more, here is a great Complete Guide To The 7 Chakras for Beginners.  And if you're new to all this, here is my favorite Chakra balancing meditation, super easy and beautiful to zen out in front of and it's only 15 minutes.  All Chakra Tuning, Mediation and Balancing.

There are also crystals that represent each Chakra.  Crystals were not included in this particular workshop, (except for the bowls), but I did bring my seven Chakra crystals with me and put them on my yoga mat.  I love the balancing energy of crystals, I think they are extremely powerful.  The row down the middle in this picture are my 7 Chakra crystals, under the clear quartz crystal, which some people use for the crown Chakra, I use amethyst but I always like to place the quartz above them all. There are many stones that can be used for each Chakra, the important thing when is comes to Chakra's is the color.  Most stores that sell crystals sell Chakra sets. And you can get them on line too.  They are inexpensive, my set was only $3, rough stones cost a little more than polished. 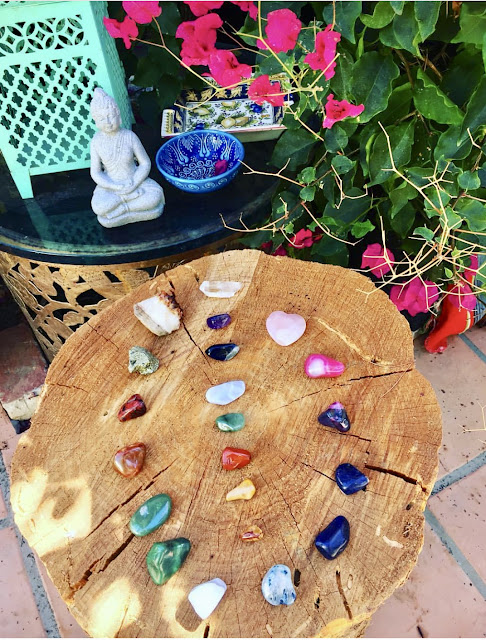 Mudra's are hand gestures that help open up your Chakra's, your energy channels in your body.  Here is a good guide from the Chopra Center a guide to learn the different mudras.  And here's a good list of the essential oils to balance each Chakra. 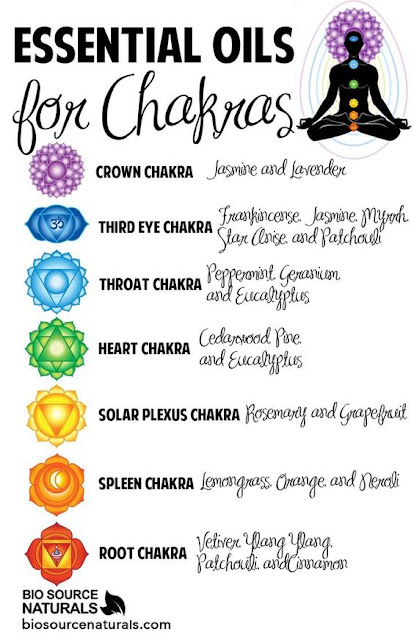 Take your ME time, you deserve it!  And whatever you love to do that feeds your soul, do more of it!!! 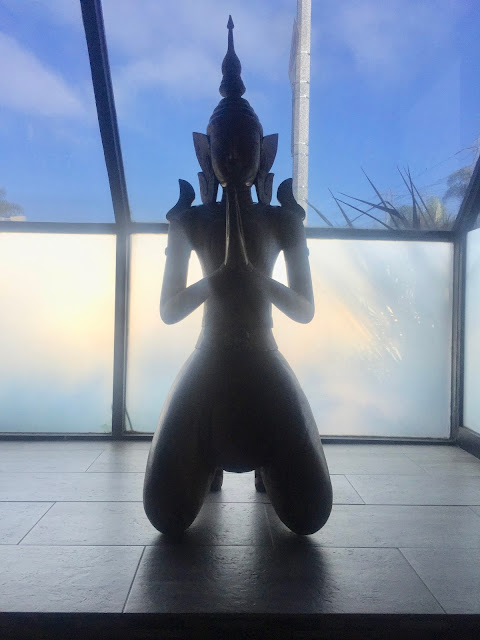 In the window at Harmony isn't she gorgeous!